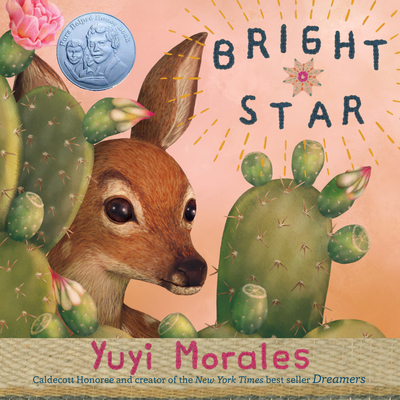 “Yuyi Morales has the ability to convey so much emotion and imagery, leaving the reader teary-eyed with a pounding heart. Bright Star is a gorgeous and stunning picture book with a powerful message.”
— Lauren Nopenz Fairley, Curious Iguana, Frederick, MD

Inspiring, reassuring, and beautifully illustrated, this new story from the creator of the New York Times bestseller Dreamers is the perfect gift for every child.

A New York Times Best Children’s Book of the Year

With the combination of powerful, spare language and sumptuous, complex imagery characteristic of her work, Yuyi Morales weaves the tale of a fawn making her way through a landscape that is dangerous, beautiful—and full of potential.  A gentle voice urges her onward, to face her fears and challenge the obstacles that seek to hold her back.

Child, you are awake!
You are alive!
You are a bright star,
Inside our hearts.

With a voice full of calm, contemplative wisdom, readers are invited to listen and observe, to accept themselves—and to dare to shout!

In a world full of uncertainty, Bright Star seeks to offer reassurance and courage. Yuyi Morales' first book since her New York Times bestseller Dreamers explores the borderlands—the plants, animals, and insects that make their home in the desert, and the people who live and travel through this unique and beautiful part of the world.

Created with a combination of techniques including hand-embroidered lettering, painting, sketching, digital paintings with textures from photographs of the Sonoran Desert, this stunning book is full of beauty—from the handwoven blanket of the endpapers through the last inspiring spread of young families facing their future with determination and hope.

Born in Xalapa, Mexico, where she currently resides, Yuyi Morales lived for many years in the San Francisco Bay Area, where she still maintains close relations with booksellers and librarians. She has won the prestigious Pura Belpré Award for Illustration six times, for Dreamers(2019), Just a Minute: A Trickster Tale and Counting Book (2003), Los Gatos Black on Halloween (2006), Just in Case: A Trickster Tale and Spanish Alphabet Book (2008), Niño Wrestles the World (2013), and Viva Frida (2014), also a Caldecott Honor Book.
"A newborn fawn awakens to a dangerous world in this sumptuously illustrated picture book set in the Sonoran Desert."—PEOPLE

"Caldecott honoree Yuyi Morales’s best book yet. . . . Bright Star, which was simultaneously published in an all-Spanish version called Lucero, does what very few picture books can do: captivate a child while moving the adult who is reading to her."—New York Times

"This book is beautiful to behold, and every spread is magically rendered with bright colors, embroidered text and the desert critters that live in the borderlands. Morales reminds her readers that all humans and life are important and that we can dream a better future into existence for all who live here."—Washington Post

★ "In English text that holds Spanish within it, Morales meditates on community, imagination, immigration, and the natural world, often pulling from current events and recent societal traumas. Thanks to some awe-inspiring moments and rather startling images, the fawn’s journey moves at a dreamy pace, inviting further rereads. . . . Utterly beautiful."—Kirkus Reviews, Starred Review

★ "An effective picture book both for learning about the Sonoran Desert’s many layers and ecological diversity and for emphasizing for younger readers the dangers of harsh divisions. . . . With all the careful and lush attention to detail, this is a picture book worth coming back to over and again. Whether in English or Spanish, keep a space for it on the shelf."—Booklist, Starred Review

★ "Beauty gleams from the pages. . . . Morales shares her love for the borderlands, shows the pain the border wall inflicts, and presents an invitation to learn more."—School Library Journal, Starred Review

★ "Morales (Dreamers) writes a love song to the land that forms the border between the U.S. and Mexico. . . . A visual shift links the fragility of the desert's life to the vulnerability of people stuck on one side of the border—both are at the mercy of oppressive forces, and their fates are intertwined. Yet Morales holds out the hope of a beautiful world, discussed in a lyrically written afterword."—Publishers Weekly, Starred Review

★ "A powerful, radiant picture book. . . . Bright Star is a marvel and a masterpiece, both a lullaby and a cry for survival."—Shelf Awareness

"The encouraging prose and the symbolism are lovely. . . . Morales captures the flora and fauna of the Sonoran desert with tender fidelity, depicting a delicate Southwestern Eden teeming with life from peccaries to bats to flowering cactus and ruptured by the harshly looming wall. Touchable textures, including wool embroidery for some words, increase the fascination of the glowing scenes. . . ."—The Bulletin of the Center for Children's Books